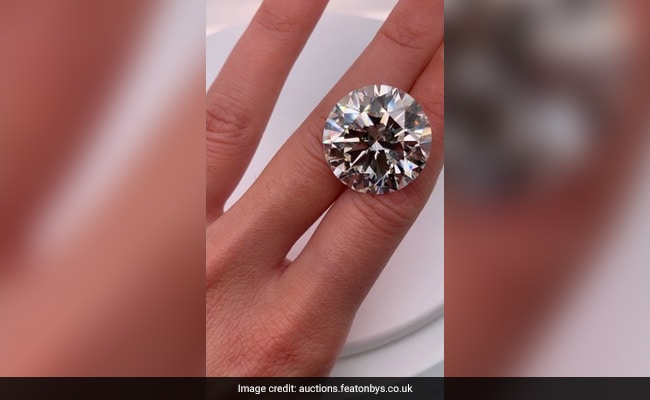 The woman found a “34.19ct Round Brilliant Cut Diamond” in her stash of costume jewellery.

A woman was in for a big surprise when she visited an auctioneer in northeast England to sell the costume jewellery she had accumulated over many years. Her bag full of jewellery contained what she thought was a relatively ordinary stone. However, tests confirmed that the stone is a 34-carat diamond and the woman is now set for a 2-million-pound windfall. On its Instagram account, the Featonby’s Auctioneers and Valuers showed an image of the gem, which is bigger than a pound coin, and detailed the story of how it came to them.

“The stone made its way through our doors back in June without any intention,” it said. The auction house initially thought the stone to be cubic zirconia, a synthetic diamond lookalike, and stored it in the director’s office. After someone suggested that it should be tested, the auction house used a tester. It came out as a genuine diamond. The auctioneers then sent it to experts in London and Belgium, who confirmed that it’s 34-carat. The carat measurement relates to the weight of the stone. Heavier stones have a higher carat and higher value.

“What a lush find,” commented a user.

This user wrote, “Love this story.”

The owner of the stone wanted to remain anonymous. The stone will be up for auction on November 30. Mark Lane, of Featonby’s Auctioneers, told BBC that the stone’s owner could not recall when she acquired it. “She told us she’d been having a clearout and that it nearly went in the bin before her neighbour suggested bringing her items to us to get valued.”

Mr Lane, who has run the auction house for five years, said it was by far the largest-value item he had dealt with. On its website, the ring is valued at around 2 million pounds or Rs 20 crore approximately.