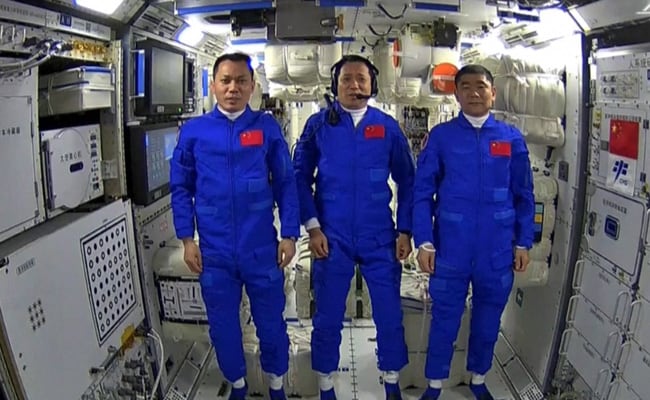 The trio blasted off on a Long March-2F rocket from northwest China’s Gobi desert last Thursday, docking around seven hours later at the Tiangong space station, where they will spend the next three months.

The launch of China’s first crewed mission in nearly five years is a matter of huge prestige as Beijing prepares to mark the 100th anniversary of the ruling Communist Party on July 1 with a massive propaganda campaign.

“Building a space station is an important milestone for the spaceflight cause,” Xi said from the Beijing Aerospace Flight Control Center, speaking to the astronauts via video link.

“This will be a contribution that opens new horizons for humanity’s peaceful use of space. You are the representatives of countless fighters in the new era of China’s spaceflight cause,” he added in the televised chat.

To prepare, the crew did more than 6,000 hours of training, including performing hundreds of underwater somersaults in full space gear.

Xi asked the astronauts about their health and working conditions, adding that they were in the hearts of the Chinese people.

First-time astronaut Tang Hongbo said that he had adapted to the zero-gravity environment.

“Food and drink, health and work conditions are all good,” he said. “We have had video calls with family. Our home in space is very warm and comfortable.”

The mission’s commander is Nie Haisheng, a decorated air force pilot in the People’s Liberation Army who has already participated in two space missions.

The two other members are also from the military.

“Having taken part in two spaceflight missions, I felt that this time, the mission is even greater and it is the highest honour,” said astronaut Liu Boming.

“We will carry out two (spacewalks) and … a series of technological equipment testing.”

The Chinese space agency is planning a total of 11 launches through to the end of next year, including three more crewed missions that will deliver two lab modules to expand the 70-tonne station, along with supplies and crew members.