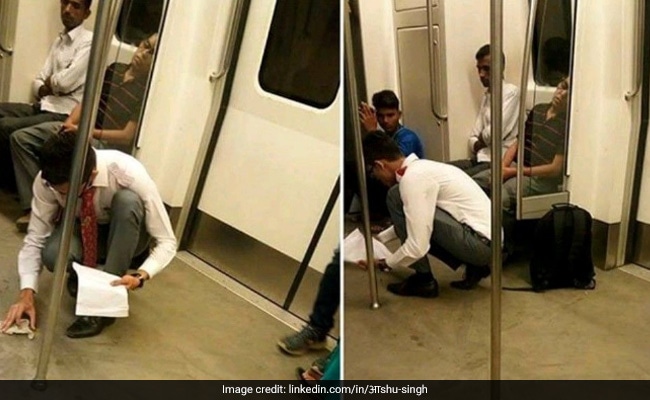 The photos were uploaded on LinkedIn by a user named Ashu Singh.

Cleanliness and hygiene are two very important factors responsible for a nation’s healthy and smooth development. But, not many citizens follow their duties and are seen littering roads and public transport.  However, a heartwarming incident from the Delhi metro throws light on an individual’s responsibility towards cleanliness and the nation’s Swachh Bharat Abhiyaan.

A LinkedIn photo that has resurfaced on the internet shows how a young boy cleaned the floor of a Delhi metro after his tiffin box mistakenly spill. The photos were uploaded on LinkedIn by a user named, Ashu Singh.

According to Mr Singh’s post, a young boy was traveling in Delhi metro when he accidentally spilled his tiffin on the floor while he was trying to take out the water bottle from his bag. While many wouldn’t bother, the young boy, surprisingly, tore out a page from one of his notebooks and picked up all the food from the floor. He then took his handkerchief and wiped the floor clean.

The post on LinkedIn reads, ”In #DelhiMetro a young boy, who was sitting with plugged earphones was taking out his water bottle from his bag when his tiffin box fell, and all his lunch spilled onto the floor. The boy tore out a page from one of his notebooks and picked up all the food from the floor. He then took his handkerchief and wiped the floor clean, exactly as it was before the spillage…Real Brand ambassador of #swachhbharatmission.”

The post has gathered more than 18,000 likes and 227 comments since being shared on Saturday morning. Many appreciated the sense of responsibility of the young man and hailed the act as an inspiring example.

One user wrote, ”Appreciate his civic sense which is missing with most living around us.” Another commented, ” This is how a cultural shift can happen. Good to promote such beautiful inspiring acts.” A third said, ”#swachhbharatmission is the key here. This should be reinforced among every Indians. Its not about a slogan it’s a vision which we should all share. This boy gives us the right example how our next generation is looking forward for our nation.”