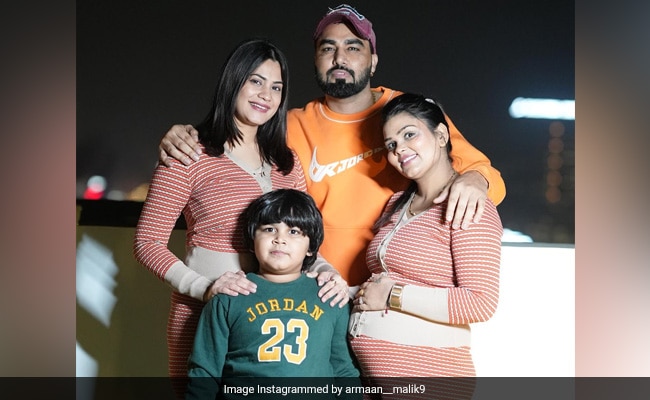 Hyderabad-based YouTuber Armaan Malik, who has two wives, Payal Malik and Kritika Malik, recently revealed that both his partners are pregnant.

Mr Malik has a massive following of 1.5 million on Instagram and 2 million on YouTube. The content creator shared the news on Instagram with pictures of his wives flaunting their baby bumps. Posing with both of them, he captioned the images, “My family”.

Take a look at the images below:

Even though the family seemed excited to embrace parenthood together, Mr Malik’s post did not sit well with many of his followers. Several internet users trolled the YouTuber and his family.

“Only this person has this talent. He also cares about timing,” wrote one user. “I am shocked… How can it be that both are pregnant at the same time,” said another.

A third jokingly commented, “Brother, you will make a cricket team.” A fourth simply asked, “Does the law allow two wives?”

Armaan Malik is a popular YouTuber and vlogger. He regularly uploads videos and photos on social media to keep his fans updated with his daily life.

According to reports, Mr Malik tied the knot with Ms Payal in 2011 and they share a son named Chirayu Malik together. In 2018, the content creator then married Ms Kritika, who was the best friend of his first wife. The four-member family have been residing together ever since. Ms Payal and Ms Kritika are often seen in photos together as well.